The V-belt acts as a transmission belt. Connecting the V-belt pulleys, it transmits the force from the engine to the ancillary components including the alternator, the hydraulic pump for the power steering.

The V-belt acts as a transmission belt. Connecting the V-belt pulleys, it transmits the force from the engine to the ancillary components including:

In a combustion engine, the combustion of the air/fuel mixture drives pistons. Via connecting rods, the movement of these pistons in a straight line is converted into the rotation of the crankshaft. The V-belt uses the force from the rotation (torque) of the crankshaft and drives additional units via V-belt pulleys. As such it is responsible for the correct operation of the engine and high levels of ride comfort. A V-belt can drive one or two additional units.

Ancillary components that are in perfect working order give drivers a strong feeling of comfort and security. 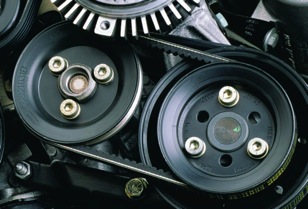 For example: The V-belt is responsible for ensuring that the air conditioning compressor it drives regulates the temperature inside the vehicleto a pleasant level in summer and stops the windows misting over in winter. It also ensures that the power steering assists the driver when steering. The alternator drive ensures not only that the necessary electrical energy (e.g. for sparking ignition or for the injection system) is supplied to the engine but also that electrical loads such as the heated rear window, lighting, heated seats, the navigation system and the ABS and ESP are supplied with power. The water pump powered by the drive ensures that the coolant circulates in the engine, thereby preventing the inconvenience that would be caused by breaking down due to the engine overheating.

Nobody would want to be left stranded in their vehicle on account of a torn V-belt because power cannot be supplied to the engine or the engine has overheated due to a failed water pump. V-belts are non-positive drive components. Their functional principle is based on friction. Therefore, they are exposed to a process of wear. For this reason, the service and replacement intervals set out by the vehicle manufacturers should be observed and V-belts should be replaced if necessary, all the more so because the associated costs are usually reasonable. The full functionality of the engine and a comfortable ride can only be assured if the engine is in perfect working order.