The brake fluid must transmit the pedal force applied by the driver of a car to the wheel brakes. As soon as the driver presses the brake pedal, the force from his foot is exerted on the brake servo the via the pedal...

With safety in mind, for this reason it is of vital importance to have the brake fluid tested annually and changed at the prescribed intervals. The brake lines and brake hoses should also be inspected as part of this check and replaced in the event of damage.

The brake fluid must transmit the pedal force applied by the driver of a car to the wheel brakes. 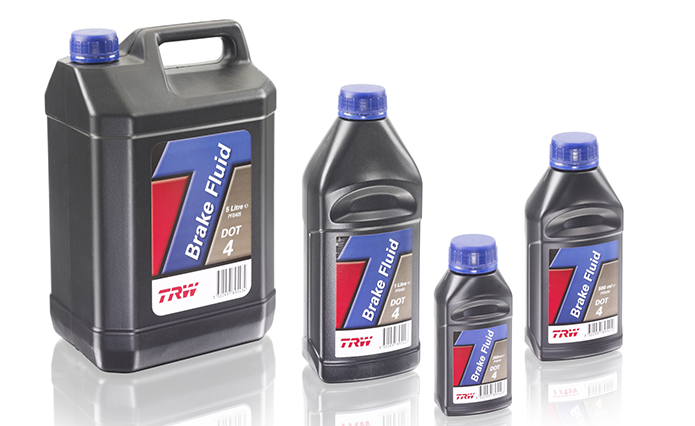 As soon as the driver presses the brake pedal, the force from his foot is exerted on the brake servo the via the pedal. The master brake cylinder converts the amplified foot force into hydraulic pressure. This hydraulic pressure is then transmitted to the wheel brakes via brake lines and brake hoses. The brake fluid acts as a transmission medium in this process.

It must meet strict requirements.

This is because some of the heat generated during braking is transferred to the brake fluid. This 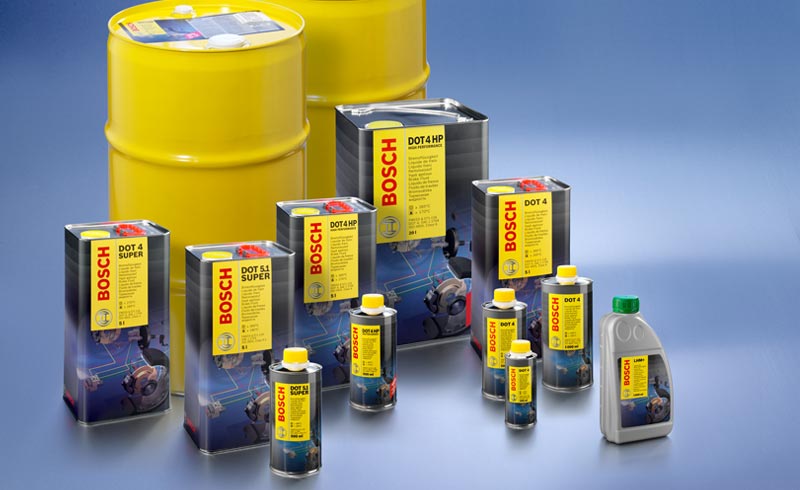 results in high temperatures which, in extreme cases, can cause the brake fluid to boil. However, when the brake fluid starts to boil, the brake pedal slackens and the braking power drops significantly. When brake fluid boils, vapour locks are produced that can be compressed. Brake pulses are no longer sent to the wheel brakes, the brake pedal goes all the way to the floor and that dreaded moment when nothing happens at all occurs.

The viscosity of the brake fluid is also very important. It is viscosity which safeguards the function of various 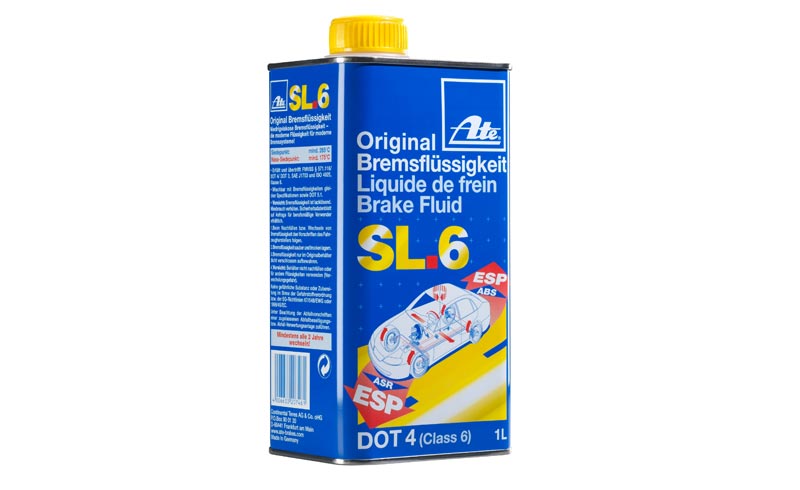 brake systems. In modern control systems such as ABS or ESP®, very low viscosity is a prerequisite for absolutely reliable control processes in fractions of seconds. The hydraulic units in these systems have numerous small bores and channels, some of which are smaller than the diameter of a human hair. Selecting a brake fluid with the wrong viscosity can have fatal consequences for the function of modern brake systems.

The boiling point of a brake fluid

The dry boiling point describes the property of a new brake fluid that is still in its sealed container. It is usually between 240°C and 280°C.

Boiling points and viscosity by DOT

Minimum requirements for brake fluids have been defined by the United States Department of Transportation (DOT) based on FMVSS 116 (FMVSS stands for Federal Motor Vehicle Safety Standard). The classes in the standard are differentiated on the basis of dry and wet boiling point, as well as viscosity.

The following brake fluids are widely available on the market:

DOT 4 brake fluids
DOT 4 brake fluids have a higher boiling point; they are usually used in the latest vehicle models. For vehicles with electronically controlled brake systems such as ABS or ESP®, some manufacturers supply brake fluids based on DOT 4 but with lower viscosity. They are sold under such names as "DOT4 Plus", "DOT4 Pro" or "DOT4 HP".

DOT 5.1 brake fluids
DOT 5.1, which is manufactured based on minerals (glycol-based). DOT 5.1 brake fluid is compatible with the DOT 3 and DOT 4 types. Its outstanding water-holding capacity means that the drop in the boiling point is minimal. This fluid is ideal for extreme operating conditions and drivers who are fans of motor racing.

The mineral-based hydraulic fluids used by some vehicle manufacturers (e.g. Citroen) are not usually categorised as brake fluids. They must not be mixed with DOT brake fluids. DOT brake fluids can be recognised by their fluorescent green/yellow colour.

Brake fluid should be stored in its original packaging. Storage time can be maximised with a closed airtight container kept in a cool, dry and well-ventilated location. Empty containers and spent brake fluid must be disposed of properly. Spent brake fluid is special waste. Therefore, it must be put into a special disposal system, where it will either be recycled or reused in the chemical industry.

High water content in brake fluid causes corrosion in a brake system. Brake lines, brake pistons and brake cylinders then reduce the braking effect and must be replaced at significant cost. Therefore, replacing the brake fluid on a regular basis will help to retain the value of the brake system and the vehicle. It should also be noted that spilt brake fluid can damage paintwork and all plastic parts. To prevent this, wash away any spillages with plenty of water.