The wheel sensor has the task of recording the speed of the wheels and communicating this information to the driving safety systems in the form of an electrical signal. All modern vehicles are...

The combination of vehicle stability systems, engine management and transmission control are making a direct contribution to increased

Wheel speed sensors supply these systems with the basic information they require to function correctly. As such, they play a key role in driving safety systems.

Today, the anti-lock brake system (ABS) is a standard feature of all new vehicles in Europe. ESP® is not far behind. To function reliably, electronic driving safety systems need information about

Wheel speed sensors (also known as wheel sensors) must detect the speed of the wheels and supply this information to the ABS or ESP control unit in the form of an electrical signal. The latest wheel sensors are also able to detect the direction of rotation of the wheels.

The ABS control unit uses this data to detect individual wheels locking during emergency braking and take countervailing measures to stabilise the vehicle. The EPS does the same thing as soon as it detects a critical situation on the basis of the wheel speed data and other sensor information.

The very first ABS systems featured the use of what are known as passive wheel sensors. Working on the basis of the principle of induction, they supply an analogue signal in the form of an alternating voltage to the electronic control unit. The passive sensor is characterised by the fact that it picks up its signal from a sensor toothed wheel which is usually pressed onto the brake disc or drum, the axle or the wheel hub. Passive wheel sensors are able to supply useful signals at and above approx. 7 km/h. 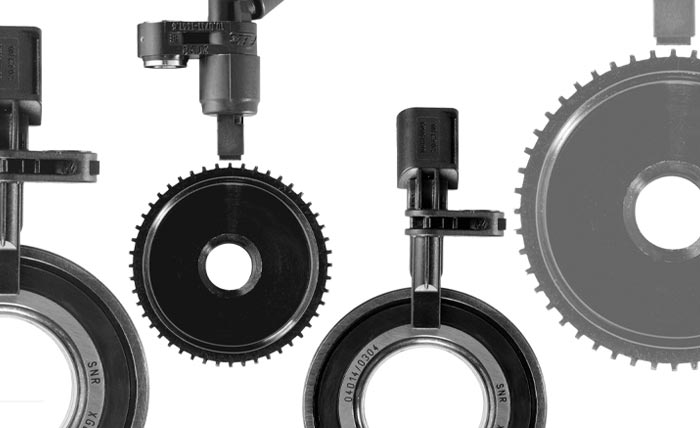 Due to the expansion of the ABS with the addition of sensors such as ESP® or anti-slip control (ASC), sensor systems that are able to emit a useful signal at very low speeds (virtually as low as standstill) are now the order of the day.

Active sensors are able to meet this requirement:

As well as being able to detect wheel speed up to vehicle standstill, active wheel sensors are also able to detect the direction of rotation. Also, from a mechanical point of view, they are much less sensitive than passive sensors. This is evident for example in their corrosion resistance, as well as in the fact that the sensor signal is not affected by varying sensor distances (caused by a "tilting" brake disc, for example).

Furthermore, the ability of active wheel sensors to function can also be relied upon in a temperature range from -40 to +150°C. Another of their advantages is that they supply a digital output signal; this does not require downstream conversion and can thus be evaluated directly by the control unit. Thanks to the far greater precision of the available speed information, the signals of active wheel sensors can even be used by other vehicle systems such as engine and transmission control, or even the navigation system.

Due to their location, wheel speed sensors are the components subjected to the greatest amount of mechanical stress within the electronic brake regulating system. Unfavourable conditions and the grit used in winter can lead to corrosion and dirt deposits on the wheel sensors and pulse wheels. In the case of passive wheel sensors, this also affects the signal quality. It may even be necessary to replace the components of the sensor system.