A fully charged car battery is essential if a vehicle is to function trouble-free. The alternator regulator must monitor and control the process to charge the battery. It must also ensure that all... 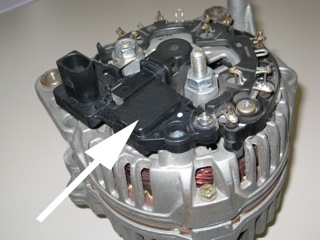 A fully charged car battery is essential if a vehicle is to function trouble-free. The alternator regulator must monitor and control the process to charge the battery. It must also ensure that all power loads in the vehicle have sufficient energy to function. The alternator control is usually a component of the alternator. Due to the different power ratings of alternators and the large number of alternator manufacturers, there are now several hundred different types of regulator.

The current flowing through the rotating solenoid (rotor) is the decisive factor for regulating the output generated by the alternator. This current is used to alter the magnetic field. It is controlled by the alternator regulator based on the battery voltage, which has been measured in advance. This measurement process is repeated up to several hundred times a second so that a change in charge at the battery can be compensated very quickly.

The voltage generated by the alternator must be higher than the battery voltage. Depending on the vehicle manufacturer's specifications, the alternator will have a control voltage of between 14 and 15 V for passenger cars and between 28 and 29 V for trucks and HGVs.

The alternator regulator also automatically adapts the battery charge to the ambient temperature. This is necessary because the charge characteristics of the car battery are not the same at -20 °C, for example, as they are at +30 °C. The regulator takes care of the need to adapt the battery charge automatically with a charging curve which is specified in the data sheets as a temperature coefficient.

Additional functions going beyond the charging of the battery were first added to the remit of alternator regulators around 15 years ago. For example:

The alternator remains switched off initially when the engine starts up. Only once the engine is running is the output from the alternator increased.This process takes between 2 and 10 seconds to complete and follows a slowly ascending charging curve. This helps starting at cold temperatures in particular or if the battery charge is low.

The regulator also minimises the mechanical stress placed on

Mechanical stress occurs when there is a change in load due to loads in the vehicle being switched on or off (e.g. the headlights, heated seats, etc.). Every time there is a change in load, the alternator regulator regulates the alternator output to the setpoint following a slowly ascending or descending charging curve. Without this function, the entire output requirement would change within a tenth of a second.

Alternator controllers are maintenance-free and have long service lives. Despite this, electronics are repeatedly damaged beyond repair due to temperatures that are too high or moisture getting into the housing through hairline cracks.

To avoid the alternator failing, the carbon brushes should be check during regular services and replaced in good time. In most cases, the entire alternator is replaced.

and so on must not be able to harm the alternator regulator. It is for this reason that using only suitable materials and providing the electronics with absolute protection against moisture are given priority as early as the design stage.

Modern alternator regulators relieve the load on the engine during the start phase, thereby contributing to a reduction in harmful exhaust gas components during starting. They also play their part in keeping the start phase very short with a well charged battery and reducing the impact on the environment.