In recent years, advances in the development of modern vehicles and increasing engine performance and speed in particular have brought about sharp focus on chassis technology as an area of development...

In recent years, advances in the development of modern vehicles and increasing engine performance and speed in particular have brought about sharp focus on chassis technology as an area of development. The shock absorber is an important component of the chassis. 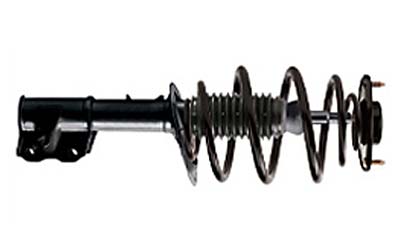 In principle, the vibration absorber is an energy converter. It transforms the kinetic energy of the springs into heat by means of fluid friction. This transformation takes place when a damper piston moves up and down in a cylinder filled with oil. During this process, precisely defined valve passages in the damper piston and/or a base valve decelerate the movement of the damper piston so sharply that the spring vibration is nipped in the bud.

The spring is needed most when driving over an obstacle. It must not be hindered by the compression of the damper, which is being squeezed at this point (compression). Once the spring has compensated for the obstacle, the shock absorber must decelerate the motion of the spring, which is rebounding with significant force. During this process, the spring is uncompressed (rebound).

The damping force of the vibration damper is higher during rebound than it is during compression. Depending on the condition of the road, the speed at which the vehicle is being driven and the outside temperature, this damping effort can result in the damper heating up to a temperature as high as 120 °C. Reliable vibration dampers are designed to withstand this type of thermal load.

Previously, cars were fitted with oil-filled shock absorbers as standard. This type of shock absorber had an inherent system flaw: a tendency for cavitation (oil foaming) occurring during the actual damping process. In damper oil, approx. 10% of the gas content is locked in a molecular bond. The movement of the damper piston in the oil creates pressure differences above and below the piston. This releases gas from the liquid and tiny bubbles form. When travelling long distances, the foaming of the oil reaches such an extent that the damping force measurably drops. On long journeys on highways or motorways, loss of damping force of up to 35% is possible. In other words, although there was full damping power at the start of the journey, this drops back slowly as the load exerted on the damper increases. As a consequence, there is a reduction in the road grip of the wheels. When the vehicle is stopped or at rest for a long period, the full damping force is restored as oil foaming decreases.

These constant changes in damping force do not occur with gas-filled shock absorbers. The gas (nitrogen) inside the damper with the oil keeps the oil pressurised, thereby preventing the gas molecules bound in the damper oil from being released. Gas-filled shock absorbers can be relied upon to exclude the risk of oil foaming during driving. As spring and damper characteristics remain constant even on long journeys and under maximum load, with gas-filled shock absorbers it is possible to precisely adjust the chassis. For chassis tuning in particular (low-slung vehicles), precision vibration damping during residual spring deflection is important.

Shock absorbers are subject to gradual wear. The driver gets used to the steady decline in drivability. Regular chassis tests in the garage are therefore essential if road safety is to be maintained. In the garage, the vehicle should be inspected on suitable test stands by trained specialists.

During the chassis test, it is important that not only the shock absorber but the entire chassis is considered. The chassis must ensure that the vehicle has sufficient contact with the road at all times. As such it is a component that is relevant to safety. The interplay of all parts of the chassis is important if both this feeling of safety on the road and the drivability the vehicle manufacturer wishes to achieve are to be maintained. Even incorrect air pressure can significantly impair drivability.