In a way, sensors are the sensory organs of the vehicle. A fundamental component of electronic control systems, they must record physical or chemical variables and convert them into electrical signals...

Sensors make modern vehicles not only safer but also cleaner. They supply the basic information for clean and effective fuel combustion in the engine, thereby enabling exhaust emissions values and fuel consumption to be reduced significantly. Finally, they support the reliable functioning of high-efficiency exhaust re-treatment systems. Examples include the controlled 3-way catalytic converter, the diesel particulate filter or the DeNOx catalytic converter. 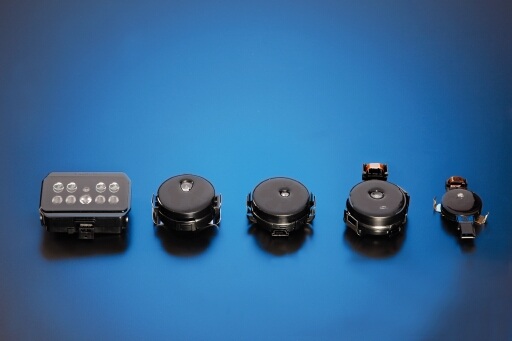 In a way, sensors are the sensory organs of the vehicle. A fundamental component of electronic control systems, they must record physical or chemical variables and convert them into electrical signals.

In recent years, there has been an explosion in the number of different types of sensor. Many new types of sensor have been seen in particular in the area of safety and convenience electronics. Essentially, sensors can be categorised as follows:

Position sensors are used to capture the position of

The ultrasonic and radar sensors used to determine distances from obstacles for modern driver assist systems also belong in this category.

Speed and velocity sensors are used to determine

Yaw rate sensors also belong in this category. They detect the rotational movement of the vehicle about its own axis and are needed for ESP.

Acceleration sensors record the acceleration of the car body and are used in passive safety systems (airbags, seat belt tensioners, roll bars) and driving stability systems such as ABS and ESP, as well as in chassis control.

Temperature sensors are used to capture temperatures, e.g. in the context of measuring

Force and torque sensors are used to measure forces such as

Flowmeters are used to capture the fuel requirement and the amount of air drawn in by the engine.

Examples of sensors for engine control:

The crankshaft sensor captures the engine speed and the position of the crankshaft. The control unit uses these values to calculate the injection pulse and the ignition pulse.

The camshaft sensor is located at the cylinder head and scans a ring gear at the camshaft. This information is used, for example, for the start of injection, for the signal to activate the solenoid valve for the pump/nozzle injection system and for cylinder-specific knock control.

The air mass meter is installed between the air filter housing and the intake manifold. It measures the air mass drawn in by the engine. This variable provides the basis for calculating the fuel quantity that must be supplied to the engine.

The coolant temperature sensor is screw-mounted in the cooling system. The gauge tip protrudes into the coolant and records its temperature. The control unit uses this value to adapt the amount of fuel injected to the engine temperature.

Knocking is an uncontrolled form of combustion in a petrol engine. As continuous knocking can damage the engine, it must be checked and regulated. The engine control unit evaluates the voltage signals received from the knock sensor and regulates the ignition point in a range just below what is known as the knock limit. Knock sensors are permanently monitored by the control unit.

The intake pipe pressure sensor measures the intake pipe vacuum downstream of the throttle valve and forwards this value to the engine control unit as an electrical signal. This is combined with the value of the air temperature sensor so that the air mass drawn in can be calculated.

The oxygen sensor measures the residual oxygen content in the exhaust gas in order to ensure an optimum combustion mixture at all times. Depending on the type of sensor, a chemical element (titanium dioxide/zirconium dioxide) and the residual oxygen content of the exhaust gas bias a voltage, which is then used by the control unit as a measured variable.

The wheel speed is used by driving safety systems such as ABS and ASR as a speed value as well as by GPS systems to calculate distance travelled. A fault will cause these systems to fail, significantly impairing safety.

The transmission sensor captures the transmission speed. The speed signal is used by the control unit for precision control of the shift pressure during shifting and to decide which gear should be engaged when.

Distance sensors are used to capture driving speed. They are mounted on the transmission or rear axle. They information obtained is required for the speedometer, cruise control and converter slip control.

For reasons of operational safety and for increased comfort, levels such as engine oil, coolant and washer fluid are monitored with level sensors. The level sensors send a signal to the engine control unit which activates an indicator lamp.

The brake wear sensors are located on the brake linings and are subject to the same wear. A visual signal tells the driver that the wear limit has been reached.

The sensor information provides the basis for the function of numerous active and passive safety systems. Thanks to significant progress in the development of new sensors, there has been a constant increase in the capabilities of safety and driver assist systems in recent years. Sensors thus have a key role to play in increasing safety on our roads.