The correct relationship between air mass and fuel quantity is of significance with respect to compliance with emission standards. The purpose of an MAF sensor is to determine the air mass and pass on the values to the engine management system.

Precise matching of the intake air and the quantity of fuel injected can help to ensure economical, low-emission engine operation. The MAF sensor thus plays a part in reducing the environmental impact of the combustion process. A contaminated or defective MAF sensor will lead to an increase in fuel consumption and exhaust emissions, as the optimum quantity of fuel required can no longer be correctly determined.

MAF sensors are extremely sensitive components. They can be damaged by contamination such as splashwater, oil mist and any dust particles not retained by the air filter. Regular expert checking is therefore necessary. Problems with or faults in the MAF sensor may cause the engine warning light to come on and it may be possible to read out the fault with a diagnostic unit. The actual source of the fault may however be a clogged measurement duct and in this case no diagnostic trouble code may be supplied. Faulty operation of other components or leakage in the intake system can also lead to the sensor supplying incorrect signals. The possibility of faults in other components should therefore always be ruled out before replacing the MAF sensor.

Extreme caution is required if an MAF sensor has to be replaced: Although the procedure is extremely simple, the MAF sensor can easily be damaged on installation.

The quantity of fuel to be injected is determined from the information provided by the MAF sensor. Proper functioning of the MAF sensor is therefore important for reliable, ecological engine operation. A defective or contaminated MAF sensor will only supply inaccurate measured values. Consequence: Excess fuel or air in the engine. This can lead to the following:

The MAF sensor is part of the intake system of modern diesel and petrol engines. This component is important for ensuring an efficient, low-emission combustion process. Its task is to obtain precise information on the

of the intake air available for use in the combustion process. The values determined are reported to the engine management system in the form of an electrical signal. The engine management system calculates the optimum fuel quantity to be injected from these values. On diesel vehicles the MAF sensor is also used to control exhaust gas recirculation.

The MAF sensor is usually located directly inside the intake manifold between the air filter and the throttle valve. A distinction is made between the older type, the hot-wire MAF sensor, and the more modern hot-film MAF sensor.

The hot-wire MAF sensor is the most widely used version at present. It is located in the outlet connection between the air filter and the throttle valve. It contains two electrically heated resistor elements: Platinum wires or platinum film resistors. Whereas one sensing element is screened, the other is cooled directly by the air flowing past.

An intake air temperature sensor and a control circuit (PCB) are also integrated in addition to these two resistor elements. The measurement point is located in a bypass duct. The design of the bypass duct ensures

A hot-wire MAF sensor functions as follows: The two resistor elements are heated by electric current and kept at a constant 100 °C. Both resistors are cooled by the flow of intake air - the screened resistor less so than the non-screened resistor.

The resistance values and the temperature difference are converted into a voltage and reported to the engine management system, which uses these characteristic values to calculate the mass flow of the intake air. The intake air temperature sensor also measures the temperature and outputs the value to the engine management system. This evaluates the air density on the basis of the signal and corrects the quantity of fuel injected.

After the engine is switched off, the hot wire is briefly heated to roughly 1000 °C for "self-cleaning" to remove contamination. This ensures full operability.

In contrast to hot-wire MAF sensors, 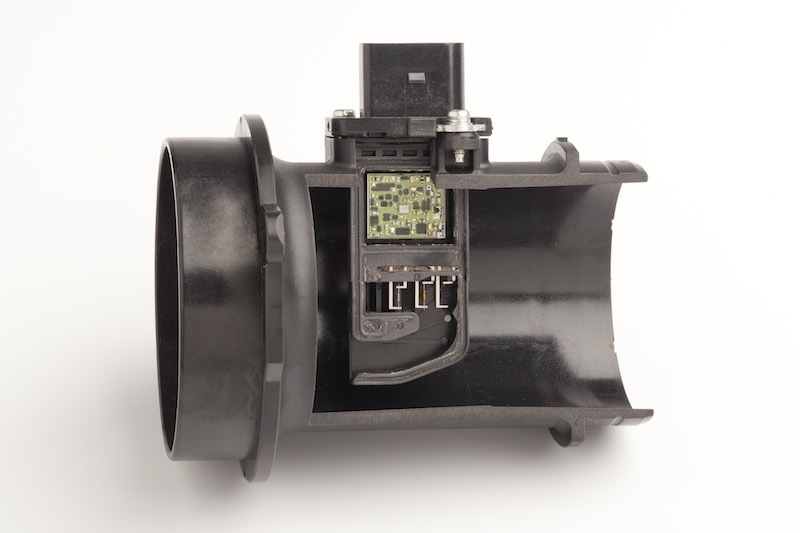 hot-film MAF sensors do not have any platinum wires, but rather a sensor plate. Use is made of thin-film resistors. The sensor is kept at a constant high temperature. The sensor cooling caused by the flow of intake air is offset by the heating current. The intake air mass can be determined from the amount of heating current required to compensate for the temperature difference. Self-cleaning is no longer necessary.