The heating and air conditioning systems in electric cars are powered by energy from the battery. As such, they are additional energy consumers which use a relatively large amount of the energy in the battery. This has a major impact on the range, particularly in winter.

On vehicles powered by a conventional internal combustion engine, the heating system uses lost heat to warm up the vehicle interior. By contrast, electric drives are very efficient and lose only a small amount of heat to their surroundings, meaning there is not much that a heating system could use.

Alternative measures for heating the vehicle are therefore required to compensate for this lack of heating power. Auxiliary heating systems such as electric auxiliary heaters or heat pump systems are used for this purpose. With these systems, the energy required is taken entirely from the battery. However, this also reduces the electrical range. Electric auxiliary heaters integrated into the ventilation system are a simple and effective but also very energy-intensive way to heat the vehicle, which is why energy-efficient heat pumps are now also being used. Seat heating systems and heated windows bring the heat directly to where it is needed, thereby also reducing the amount of heat required for the interior. What’s more, electric cars can be pre-set to a specific temperature whilst they are being charged before the driver sets off. This negates the need to draw power from the battery and means less energy is required to heat or cool the vehicle while it is under way.

Electric compressors, also known as e-compressors, are used to cool the interior instead of a conventional, mechanically driven compressor. They power a refrigerant circuit, which compresses the refrigerant flowing within it to the desired pressure so that it vaporises and condenses at the desired temperature. The transition from liquid to gaseous refrigerant (“vaporisation”) generates a refrigerating capacity which enables cooling even below the ambient temperature. This principle for cooling the interior during the summer is also used to cool the battery when ambient temperatures are very high.

The heat that is released when gaseous refrigerant becomes liquid refrigerant (“condensation”) can also be used to heat the interior during the winter. It is also possible to use energy-efficient heat pumps which not only provide heating, but also cooling during the summer by acting as an air conditioning system. 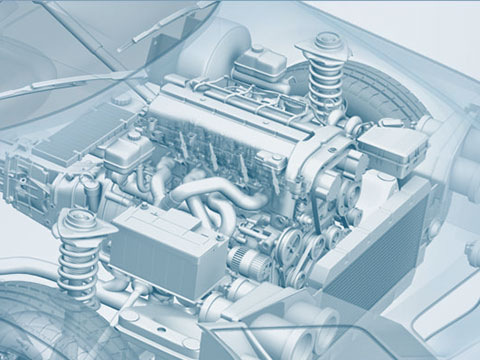 The function of the compressor oil is to lubricate the moving parts in the compressor. The oil film also keeps the rubber seals in the refrigerant lines and connections supple and reduces diffusion.

Electric compressors, also known as e-compressors, lie at the heart of the air conditioning and refrigerant circuit in electric vehicles.

Electric compressors, also known as e-compressors, lie at the heart of the air conditioning and refrigerant circuit in hybrid and BEV vehicles.

High voltage PTC heaters are interior heating systems for electrically powered vehicles that are independent of a drive system. 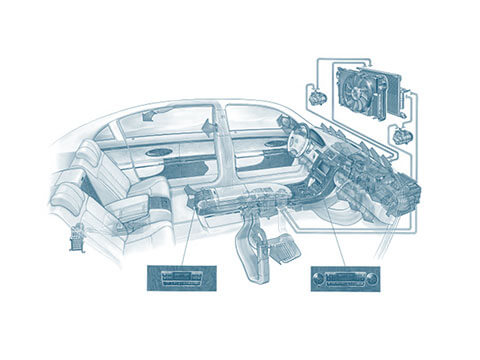 As we all know, engine compartments have got much smaller, resulting in an enormous build-up of heat that must be dissipated. Much is being asked of modern cooling systems where cooling down...